You don't have any saved vehicles!

Look for this link on your favorites:

Once you've saved some vehicles, you can view them here at any time.

It is interesting that Port Lavaca would probably not exist if it were not for a HUGE Comanchee raid in 1840, called the Linnville Raid of 1840.

PORT LAVACA, TEXAS. Port Lavaca was originally known as Lavaca, The town was founded in the aftermath of the Linnville raid of 1840, which was a part of the largest of all Commanche raid in the south. Comanche attack that swept through Victoria, about twenty-five miles to the northwest, and Linnville, 3½ miles to the northeast.

The burning of Linnville prompted many of its citizens to move to the site of what is now Port Lavaca. The town was named La Vaca (“the cow”) in 1841 and was laid out by 1842. It was situated on a bluff some fifteen to twenty feet above the bay. Commission men from the East reportedly played a significant role in establishing Lavaca, which they envisioned as an important shipping point for exporting raw materials and importing manufactured goods. Lavaca fulfilled this expectation, succeeding Linnville as the busiest port on the adjoining Matagorda and Lavaca bays during the period of the Republic of Texas.

When Calhoun County was established in 1846, Lavaca became the county seat. It also received a post office. In 1847 the community became a terminus for ships of the Morgan lines, and in November of that year a stagecoach route was established between Lavaca and Victoria. In 1849 Lavaca raised its docking fees to help pay for improvements to its wharves. Soon afterward Charles Morgan abandoned Lavaca and rerouted his ships to the mouth of Powderhorn Bayou, a few miles south of Indianola. The presence of sandbars in Lavaca Bay, which forced Morgan’s ships to dock at a distance and to employ costly and time-consuming lighters, may also have prompted the move. Despite the loss of the Morgan-lines trade, Lavaca continued to prosper and to compete for supremacy as the premier port in the Matagorda Bay region. Wagontrains and carts freighted goods between Lavaca and southern and western Texas and northern Mexico. Export items included cattle, hides, tallow, and horns, as well as cotton, wool, pecans, and mustang grape wine; also exported were copper, lead, silver, and gold. In 1850 Lavaca had a free population of 231 and a slave population of 84. Of the 231 free individuals, only 28 were foreign born. (Indianola, an entry port for the Adelsverein, had a free population of 378, of whom 237 were foreign born.) 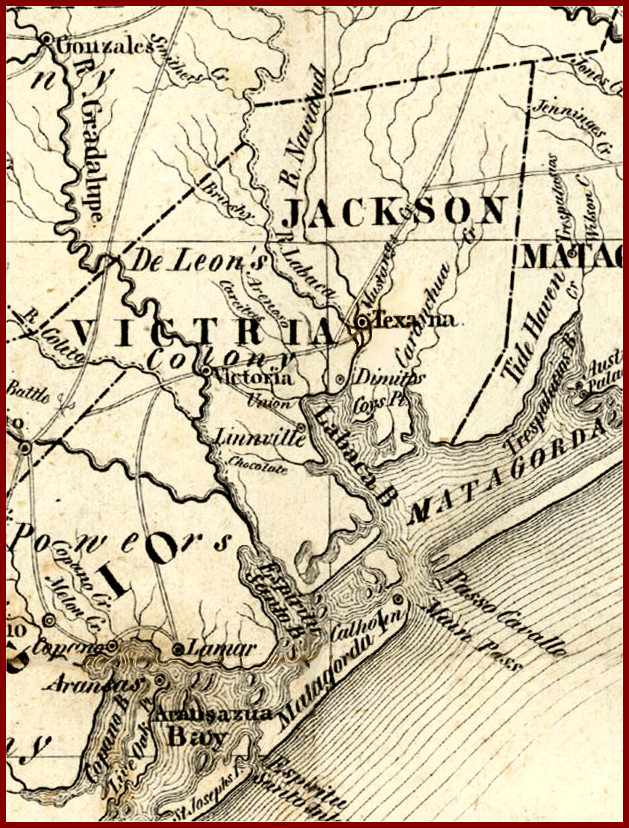 That same year Lavaca had two schools for girls, with a combined enrollment of seventy, and one school for boys, with an enrollment of thirty-six. The San Antonio and Mexican Gulf Railroad was chartered on September 5, 1850. Grading on the road began in 1856, and in 1858 five miles of track were put into operation. Though this short stretch of road ended at the time in empty prairie, the company did a healthy business. In 1861, twenty-three additional miles were completed into Victoria. In 1852 Indianola became the county seat, as it had the advantage over Lavaca of a deepwater port at nearby Powderhorn. That year Lavaca businessmen invested in dredging equipment to dig a channel through the sandbars that obstructed access to their port. In 1854 Lavaca had a district school. Newspapers during this early period included the Lavaca Journal (1847-ca. 1848); the Commercial (1850-53); the Lavaca Express, which published one issue in 1853 before moving to Goliad; the Lavaca Register (1854-ca. 1855); and the Lavaca Herald (1855-59), which was succeeded in 1860 by the Gulf Key. 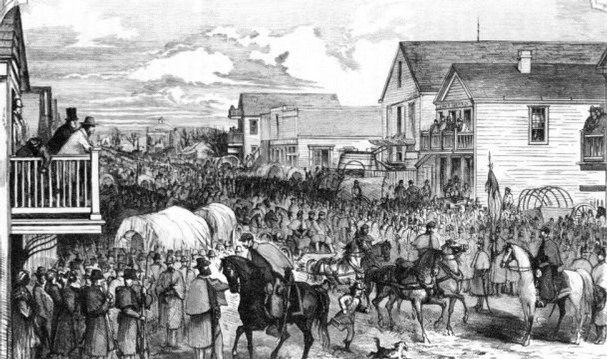 By 1860 Lavaca had fallen further behind Indianola, with a white population of 526 to Indianola’s 1,150. During the Civil War, Lavaca was a hub of military activity. Several garrisons were stationed at different times in the town, which also had a large Confederate arsenal and small-arms manufactory. Federal gunboats bombarded the port on October 31 and November 1, 1862, but the city, defended by two waterfront batteries, did not surrender, and the gunboats withdrew. During the war a Lavaca resident, Capt. Edgar Collins Singer, designed an underwater mine, which he tested successfully in February 1863. Singer subsequently manufactured the mines in Mobile, Alabama, for the Confederate government. Lavaca was occupied by Federal troops in December 1863. In April 1864 voters elected to change the county seat back from Indianola to Lavaca, reportedly because some county officials in Indianola had sworn allegiance to the Union during the Federal occupation of that city. Federal troops evacuated the Matagorda Bay area in June 1864. In September 1865, after the end of the war, Indianola again became the county seat.
In addition to the disruption of commerce as a result of the Federal blockade, Lavaca suffered from the destruction in the winter of 1862-63 of its wharves and railroad, an action ordered by Confederate authorities. The railroad was rebuilt in 1866. In 1870 Lavaca reported a white population of 429 and a “colored” population of 339. The hurricane of 1875 (see HURRICANES) so damaged the railroad near the town that the five miles of tracks from Lavaca to Lavaca Junction (later Clark’s Station) were taken up. Thus Indianola, which enjoyed better access by water than did Lavaca, now had the only rail connection as well (having completed a road to Lavaca Junction in 1871). By 1880 the population of Lavaca had fallen to 100, and by 1884 it had declined to seventy. In 1884 the only businesses reported there were a general store and a combination dry-goods and grocery store; at that time the town also had two churches and the district school. The abandonment of Indianola after the hurricane of 1886, however, removed Lavaca’s chief rival in the Matagorda and Lavaca bays region, and the town began a long period of steady growth. In November 1886 Lavaca once again became the county seat, and in 1887 its railroad connection with the track to Victoria was restored. About this time the community began to be known as Port Lavaca.

The 1890 census reported a town population of 365, though another source claimed a population of 500. By 1896 the estimated population of Port Lavaca had risen to 800, and the town had two hotels and a weekly paper, the Port Lavacaen. With the expansion of railroads in the state during the 1880s, Port Lavaca never regained its prestige as a shipping point for cattle. Instead, the shipping of seafood became an important part of the town’s economy. Tourism also became important, with the train bringing weekend excursionists to Port Lavaca pavilions and oyster roasts from places like Houston, San Antonio, Cuero, and Victoria. Sportsmen also traveled there for fishing and hunting. Port Lavaca incorporated as a general-law city in 1909 and almost immediately thereafter established an independent school district, voting sufficient taxes to keep the school open for the full term. By 1910 the town had two banks and two cotton gins, in addition to a broom factory, an oyster-knife factory, an ice factory, an electric plant, and a local telephone company. In 1910 the federal government dredged a channel from Pass Cavallo to Port Lavaca, and in 1913 the section of the Gulf Intracoastal Waterway below Galveston was completed, giving Port Lavaca an inland water link with that major port. The Port Lavaca city government functioned until November 1916, when the city went bankrupt. It incorporated again as a general-law city in November 1919. In 1920 a seawall, designed to protect Port Lavaca from high water and erosion, was completed. The export of shrimp (see SHRIMPING INDUSTRY) became a major industry during the 1920s and in 1928 contributed to Port Lavaca’s leading the nation in the amount of seafood shipped. A municipally owned quick-freezing plant opened during the Great Depression. Originally intended for vegetables, it proved ideal for freezing seafood and further enhanced that feature of the town’s economy. Natural gas was discovered near Port Lavaca in 1934 and oil in 1935. In the latter year an ample supply of artesian water was also made available.

During the late 1920s and early 1930s access to Port Lavaca was improved by the surfacing of roads in the county and by the completion of a causeway from Port Lavaca to Point Comfort, on the eastern shore of Lavaca Bay. In 1940, however, State Highway 35 remained the only paved highway in the county. Passenger train service was discontinued in 1935. In 1936 the city harbor was dredged and the channel through the sandbars reopened. The establishment since the late 1940s of such industries as Aluminum Company of America (Alcoa), Union Carbide, Du Pont, and Formosa in Point Comfort and other nearby communities has contributed to Port Lavaca’s growth. In addition to manufacturing and seafood, the town’s economy rests on agriculture and livestock, construction, mineral extraction, and tourism. The location of an Aluminum Company of America plant at Point Comfort gave impetus to efforts in the 1950s to acquire a deep-sea channel for Matagorda and Lavaca bays. The Matagorda Ship Channel was completed in 1965 to Point Comfort, with side channels branching off to Port Lavaca. A harbor of refuge was also created at Port Lavaca for the protection of boats during storms. In 1963 the Port of Port Lavaca-Point Comfort was designated a United States customs port of entry. 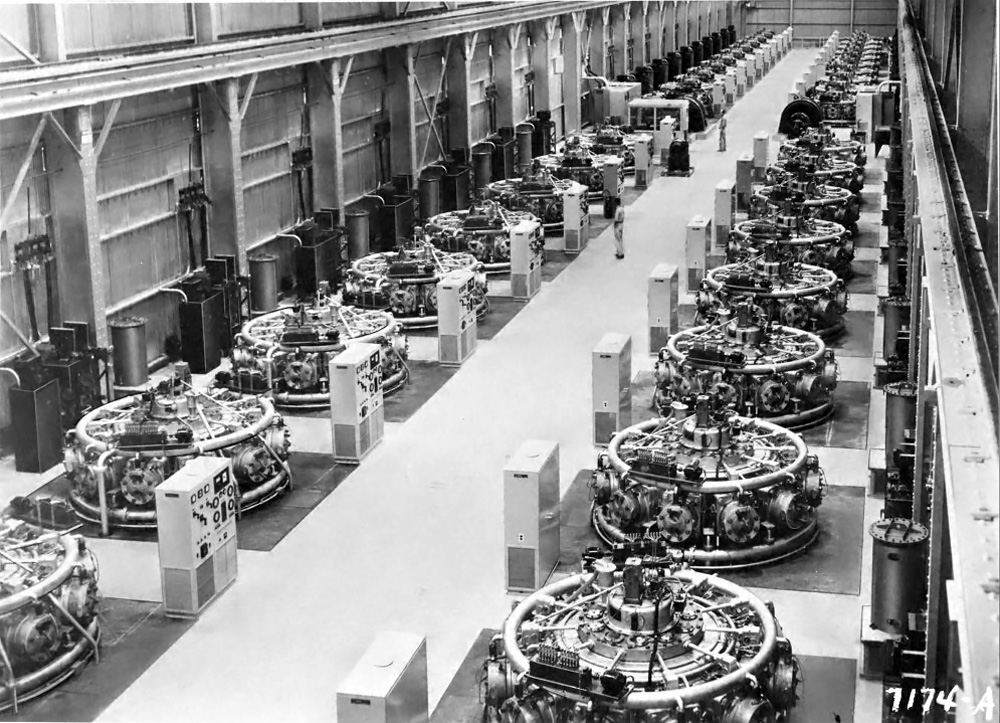 The population of Port Lavaca rose from 2,069 in 1940 to 5,062 in 1950, 8,864 in 1960, and 10,491 in 1970. The 1990 population was reported as 10,886. County officials in the early 1990s began to lobby for a new causeway over the bay to supplement the other causeway, which was completed in 1962. In 1990 freight and passenger connections with Port Lavaca included bus lines, motor freight lines, and the Southern Pacific; there was also charter aviation service at the Calhoun County Airport. In the early 1990s the city had a daily newspaper. It also had one high school, two junior highs, and five elementary schools. Public facilities included a county hospital, a municipal swimming pool, and a library. In 1992 Port Lavaca operated under a home rule charter, adopted in 1956 and amended in 1968 and 1972. City government included a mayor, city council, and city manager. By 2000 the population reached 12,035. 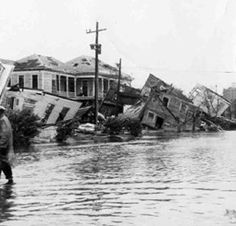 In 1961 Hurricane Carla seriously damaged the original causeway, which was subsequently abandoned. Part of it, however, was converted into a 3,200-foot-long fishing pier (the Port Lavaca State Fishing Pier). At the foot of the pier is Lighthouse Park, which includes a manmade sand beach and a nature walk designed to give access to wetlands. Also in the park is Half Moon Reef Lighthouse, originally built on Matagorda Island in 1858. Resembling lighthouses on Chesapeake Bay more than those on the Texas coast, this was one of three remaining lighthouses in Texas in 1991. Another park is Main Street Park, located within the shells of two historic buildings. Other points of interest in the area include a small cemetery, adjacent to the city harbor, which contains the grave of a settler killed in the Linnville raid; the site of Indianola; and a statue of René Robert Cavelier, Sieur de La Salle, at Old Indianola, commemorating the first effort to establish a European colony in the region. Celebrations in Port Lavaca include the Fishing Festival over the Labor Day weekend, the Taste of Heritage festival in the summer, the county fair in October, and the Festival of Lights in December. For a time Port Lavaca was the terminal point of the Texas Water Safari, a paddle race that begins in San Marcos. First held in 1963, when the route ended at Corpus Christi, the race was shortened over the years and by 1982 concluded at Seadrift. In 1985 a celebration marked the 300th anniversary of La Salle’s landing, and in 1990 Port Lavaca observed its sesquicentennial.

You don't have any saved vehicles!

Look for this link on your favorites:

Once you've saved some vehicles, you can view them here at any time.